Royalists wont hesitate to slam Mugabe for taking public money and giving himself a million pound birthday bash but I couldn’t help but wonder, isn’t this argument a bit like our own British queen’s jubilee? Apologies in advance for linking to the Daily Mail, but the contradiction is amusing. They cannot help but gush about the royals most of the time: Here’s a classic double whammy: “Health & Safety has gone mad and it’s stopping us celebrate our glorious subjugation”

Those arguments aside, I wonder which one is more costly to it’s respective taxpayers and economies?

The short version is that Mugabe’s birthday could be proportionately (taking into account population and the relative sizes of economies) 13 times LESS expensive. Say what you want about human rights, as a dictator, at least the man is good value for money. The long version then….

Bearing in mind all figures used are pulled from sources of varying quality, and that the events themselves haven’t happened yet so a lot is still up in the air. All my sums and sources are in this spreadsheet, and Wikipedias latest estimates for population, GDP etc

All calculations in USD, unless noted and for your info ‘GDP PPP’ means Purchasing Power Parity. Its a better way of comparing international levels than the usual ‘per capita’, though it is still at the level of “per-person”. 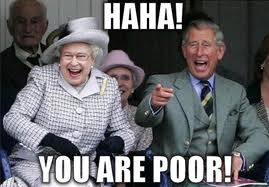 So, the cost for the UK is really where we have to start wondering, various stories have been kicking around, now to explain the ones I’ve chosen.

The event (parade, procession, whatevs) itself has had 1m GBP set aside since 2010. There are all kinds of other events going on, but this, as far as I can tell is the main one. Around 3m of Lottery money is going to Jubilee-specific events, and if you feel like contributing more, a Jubilee trust has been set up and is accepting donations.

Some medals are planned, these will cost 7-8m GBP and will go to various worthy people: armed forces, emergency services etc. There are nearly 500k of them being made (14 quid a go, then). At least they are being manufactured in Birmingham, and the extra work has generated a huge 7 (seven) new jobs. Hmm.

The proposed yacht? Nobody seems to know if this is happening at the moment, and from what I’ve seen I’m fairly sure a large part of the cost would be made up through donations. If people want to buy someone else a massive yacht with their own money, who am I to judge?

Local authorities across the country are also doing various things. According to Freedom of Information requests, 43 are doing something, 97 have no plans and we just don’t know about the rest. Currently the cost here is 547k GBP.

The DCMS cost-benefit analysis estimates the WORST case scenario for the economy (lost productivity due to an extra bank holiday) at 3.5bn and the BEST case scenario (extra tourism due to event) at 1.2bn. Obviously we don’t know what is going to happen yet, so I have (like the DCMS) averaged out these two scenarios to a loss of 1.15bn.

Pretty much everything else is dwarfed by the wider economic impact, you can see. However I have calculated with and without taking this into account.

Cost per capita: – Total cost / population (note- not what it actually costs you, the taxpayer)

Cost as multiples of GDP PPP: – Total Cost/GDP PPP = (I like to think of this one as the effect you’d get if you took this number of people completely at random out of the economy and just blew them up. A little abstract but a good comparator for international stuff I think.)

So it’s a bit of a back of a fag packet job, but I found it interesting nonetheless.  The “13 times” bit comes from the GDP PPP comparisons – effectively in the UK it is costing us 13 times more than the event in Zimbabwe: expressed as a number of “people in the economy” if you will. I bet there is an errant extra 0 in there somewhere to make it all meaningless.

It doesn’t all boil down to  true ‘cost’, bits of the money will be recirculated (as with the medals for one thing) and there will be some degree of tourism going on, and various things will find their way back to the treasury as VAT, income tax etc etc snore. Maybe in the end it will confer a net boost to the economy, who knows.

Obviously I haven’t found a Zimbabwe equivalent of the DCMS to get a cost-benefit analysis from, though I’m fairly sure Mugabe’s birthday isn’t a national holiday (though I think he did try) and even if it was, I think the economic impact whether positive (tourists) or negative (not working) would be likely to be less noticeable than in the equivalent in the UK.

Even just comparing event to event, obviously the UK economy is much larger, so the cost as % of GDP is tiny, but the cost per capita is still about 3 times as much: a good contradiction to put forward to the anti-Mugabe/pro-Royal brigade.

And finally, for all the things I find disagreeable about having a royal family, I’d just like to go on the record and clearly state: I don’t think they are as bad as Mugabe.

I’m not suggesting we’d be better off with the one rather than the other, just that it’s hard to stay credible if you attack him over the costs of his celebration while supporting the costs of the Jubilee.

Massive thanks to Full Fact for a lot of the info