Every new thing I learn about owls is more interesting than the last.

Here are some of their best features:

1. The front or ‘leading edge’ of their wings have feathers (called remiges) which are serrated. This disrupts the flow of air, making them able to fly or glide silently. 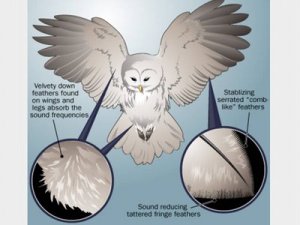 2. The pattern of feathers around their face looks like a satelite dish for a good reason: it is one. The dish shape helps capture and position sounds (audiolocation). The Great Grey Owl has the biggest face dish, and, might I say looks all the better for it: they need it so big to hear prey under the snow.

3. Their ears hide just to the side of their eyes. Sometimes the little tufts that look like ears are just for show. Visible ears are for chumps, decoy ears are where it’s at.

4. The left and right ear openings (apertures) are at different heights on the head, to assist audiolocation: although this means finding headphones that fit can be difficult.

5. Owls can detect a time difference between the left and right ears of 30 milliseconds. Humans can do the same at 10 microseconds, so 3000 times slower. The actual frequency range (high to low pitch) of humans and owls is pretty similar. They are offended by your out of tune singing.

Also not impressed. Image by @BenEarwicker

6. We all know crows are smart birds. By comparison, a barn owls’ medulla (just the part that deals with hearing) has 3 times the number of neurons, so burn on the crows.

Providing a rather dramatic take on the situation: http://hey-y-owls.tumblr.com

7. You basically have two main families of owls: Tytonidae (barn owls, 18 species) and Strigidae (typical or true owls, 198 species). Barn owls have the characteristic heart shaped face, no ear tufts and only hunt at night. Some varieties of true owls (of which there are a greater range) hunt during the day. Barn owls also have longer legs and larger heads, compared to their overall size. New species of owl are still being discovered, most recently different types of Scops Owl in Indonesia: 45 so far (making them the largest genus within the true owl family)

Thanks to http://basineducation.uwex.edu for the image, even if they both look pretty mad.

8. Owls eyes are so well adapted to low light that they aren’t really eyeballs as such, more like big tubes: held in place by bony ‘sclerotic rings‘. This means owls are always looking straight ahead; they can’t roll their eyes, they have to move the head to look elsewhere. (You know you want to try it) Their necks are extremely flexible to compensate, and they have twice as many verterbrae (14) here than a human. We can safely say that they always have their eyes on the prize: If we were the type of person who likes bad jokes, which we are, so shut up.

From the excellently named owlpages.com

9. But all that night vision has to come at a cost right? Cats, for example, can’t see as well as humans in daylight: clearly leading to all sorts of hilarious Youtube videos. Owls, on the other hand, can see better than humans both in daylight or the dark. (Well, some of them)

11. The two biggest owls (Eurasian eagle owl, Blakistons fish owl) can take down pretty big prey. The Eagle owl has been known to prey on foxes and young deer, weighing up to 17kg: though it won’t actually pick them up and fly off (shame). The Fish owl gets salmon, pike and catfish up to 6kg, which is twice as heavy as the owl itself. Could you fish a thrashing 25 stone guy out of the water? Pet cats and dogs get targeted occasionally, maybe as ‘standard’ prey gets harder to come by in the wild. 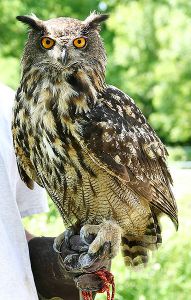 DOOM ON YOU (source: wikimedia commons)

12. Owls also have a really low ‘wing-loading ratio’. Big, rounded wings and relatively low weight means they can fly really slowly. Why would being able to fly slowly an advantage? For those last few feet of closing in on a tasty mouse, that’s why. Who dive bombs and misses at the last second?

13. A pair of owls and young get through maybe 1000 small rodents a year, making them the #1 best option for rodent control: not just better than cats, but even better than poison. Not only do you not end up poisoning the wildlife, you have the added benefit of a personal owl powered mouse shield.

14. Owls have got haters. Other birds find them so deadly that they will gang up and harass the owl to try to get them to leave the area. Often this happens during the day, so the owl is like ‘Tsha… dude, trying to sleep here’. But under enough pressure, they’ll get all Bruce Lee on the attacking birds, fending off dozens of crows or jays at a time. The owl may leave… for now. See some Robins giving a big owl a little nudge here.

15. If you were unfortunate enough to be eaten by an owl, you get digested twice, turned into a pellet and puked back up. No chewing. The owl has to get rid of the pellet before it can shove anything else in. That’s why there are no fat owls.

16. The owls lightweight skeleton makes up under 7-9% of it’s overall body weight, whereas yours or mine makes up 30-40%. Again, no fat owls.

17. Some owls can pant to reduce their body temperature, like a dog. It’s unknown whether they stick their heads out of car windows though.

18. The head keeper of The World Owls Trust appears to be a guy called Wulf.

Gotta have a cool name to deal with this on a daily basis. (World owl trust)

19. It is illegal in the UK to disturb a barn owls nesting place if they are sitting on eggs or owlets. 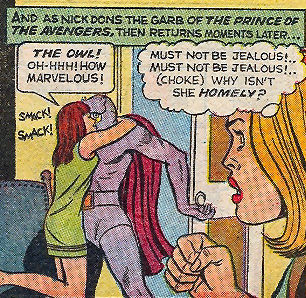 Maybe you will be arrested by Golden age superhero ‘The Owl’ – ladies love him. Find out more at http://www.armagideon-time.com

20. The collective noun for a group of Owls is a Parliament. (crows = murder, lions = pride etc). In my mind this ties with ‘A Mischief of Ferrets’ for best collective noun EVAR.

21. What is kicking the hell out of the barn owl population? From 12,000 breeding pairs in 1935 to a saddening 2,000 in the UK today. Bigger fields and less hedgerows/rough grassland means less  hunting territory. Less old farm buildings and old hollow trees for nesting. Being hit by road traffic is another factor: owls now rarely nest within 3km of a motorway. Chances are they’ll starve as an inexperienced youngster, get into a collision or even be poisoned. (Rats eat poison, owls eat rats, owls get poisoned)

22. Where did owls come from? Where are the dinosaur hunting owls of days gone by? The Cuban Giant Owl (Ornimegalonyx) was around 1 freaking meter high, and nearly 10kg in weight. That’s as high as a Great Dane. Apparantly it may have ‘reluctant’ to fly, and could down prey up to 35kg in weight – at this time ground sloths and ‘hutia’ (capybyras).

And those are 22 reasons why Owls are the best. THE END. Signed, Richard Fletcher, Age 26 and 1/3rd 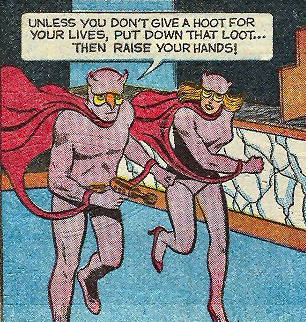 A HOOT FOR YOUR LIVES. LITERATURE IS DEAD TO ME NOW.