Want to see it in action or try cooking something in it? Join us at Saffron Acres for a relatively low key Halloween-Harvest type fun day on Saturday the 18th of October from about 12 noon onwards. More details about the event at the end of the post, however, let’s finish the building first… 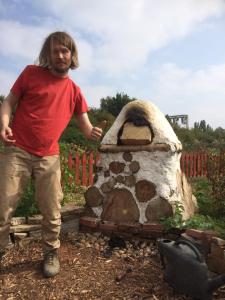 What have we learned?

– Earth is quite literally, dirt cheap, providing it’s got a good amount of clay in (say from 25-75%). This oven cost nothing except time, a bit of sand and a sack of hydralime (of which we only used maybe a quarter at most).

– Cordwood (the base) is also dirt cheap providing you have access to logs you aren’t going to be using for anything else. We could have been pickier about using uniformly shaped pieces, and also pieces without bark on. Remember the core is also full of some odd bits of rubble. The sheer weight of the whole thing is probably the main thing holding it together.

– Later we drilled a small (ie finger-width) hole in the rear to help the fire get started. It’s partly impatience but I’ve found myself fanning the fire quite a bit to get it going and as hot as possible. It’s not too much hard work, but leading to another observation…

– Overall this dome is on the small side, compared to some others out there on t’internet. This obviously affects how much you can cook in it at one time, as well as the amount of airflow through the door.

– It’s hard to be scientific about it, but wood chip in place of straw for a cob mix seems to perform similarly (structurally and thermally). The longer, thinner fibers are probably more consistent and easy to mix than lumpy wood chip.

– The glass bottle layer seems logical but I don’t have anything to compare it to. Firebricks for the base also might have been beneficial but the concrete pavers we used seem fine. (Though will have to see if they breakdown over time)

– Digging, sifting and mixing was probably 75% of the whole effort. For anything much larger, some mechanical help would be recommended. Of course you may not have this much lying around, or don’t fancy digging a pit in your garden which introduces the issue of transport costs.

– Some of the other side benefits of earth buildings can be seen: it’s relatively non-toxic (though too much dust can be a thing, or splashing some limewash in your eye) and is a good insulator. It’s almost completely fireproof.

We will be having a open day of cooking Saturday the 18th of October from about 12 noon onwards. The oven will be lit and you’re welcome to bring anything along you want to try out. There’s extra veg around for pizza toppings, corn on the cob, salad bits. All welcome, limited parking on site if you are coming by car. Bring a bottle. (Jesus, I hope the weathers okay…)

For those of you who don’t know where Saffron Acres is, it is fairly central, on Copinger Road, just off Saffron Road. Near the Aylestone Leisure Centre.

Email me at : rfletcher@dmu.ac.uk for more info

Hope to see you there!