Cement is bloody useful but it also accounts for around 5% of all man-made carbon emissions. 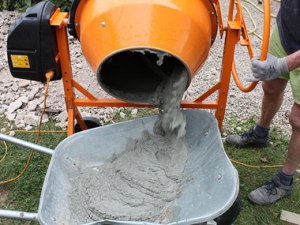 What is it and what are we supposed to do about it?

Let’s be specific, in a contemporary sense we are likely to be referring to Ordinary Portland Cement, named for it’s appearance after Portland stone.

The simple (and quite possibly wrong, I’m not a chemist) version is that cement is 2/3rds “calcium silicates” and 1/3rd “other stuff”

The calcium silicates are : 3 parts Calcium Oxide (CaO) and 2 parts Silicon Dioxide (SiO2), with a smidge (<5%) of Magnesium Oxide. Calcium Oxide you may recognise by it’s common name: quicklime; which is manufactured by slowly combusting Limestone. Silicon Dioxide mostly comes from refining quartz, which is pretty abundant in the earths crust. Almost all of the Silicon Dioxide produced is used for the production of cement.

The “other stuff” (so named because recipes vary) can include clay, shale, sand, iron ore, bauxite, fly ash and slag. This is a bit confusing because when you mix cement with water and some more aggregate, you get concrete (which, like cement, is a bit of a catch all word) The aggregates in this case are more likely to be stones, sand, recycled concrete… but can also include slag and fly ash. Different quantities and methods.

What makes lime such a popular green alternative to cement? There’s a lot of lime (Calcium Oxide) in cement so how different could they be? Cement kilns need to fire at around 1400-1500 Celsius, whereas Lime kilns slaking can be done at a comparatively low 900-1000 Celsius. Okay, that’s more energy to begin with, but it also means to reach the higher firing temperature you are almost certainly going to have to use coal, whereas lime doesn’t necessarily have to; and in pre-industrial times, generally didn’t. In either case, the mixing and firing of these materials is generally quite a messy business, the raw materials releasing sulpher, nitrous oxides and other generally unpleasant particles. Cement kilns have used old car tires and other waste materials as fuel too; hooray for recycling, I suppose?

Of particular importance, I think, is that lime mortars are far easier to remove, replace and recycle anew – with care, it seems they can be used multiple times and if push comes to shove can be disposed of with fewer negative impacts. Cement/concrete on the other hand cannot be recycled and it is difficult to remove from whatever you might be looking to reclaim (generally bricks). At the same time, as a building ages, the lime mortar has the advantage of being more flexible whereas cement is more brittle and will not adapt as well.

It seems to be the general claim that lime mortar also absorbs a lot of CO2 during the drying process, but this is also true of Portland cement, and I can’t find a source at the moment comparing the two. This source even claims that a newer method could absorb 3x more CO2 than lime, a carbon negative cement? Furthermore, we are only just beginning to fully understand what makes cement so useful at a molecular level – if it’s possible to create an ultra-dense concrete, we wouldn’t need as much in the first place.

Alright, alright, what am I supposed to do about it anyway?

Two options really – design it out as much as possible, or find alternative materials.

The majority of cement used in a domestic building is going to be in the foundations – at least, this will be the hardest amount to replace, compared to render or mortar.

Pile foundations – a bit like The Segal-style method – are a good approach to designing it out.

The main alternative green-builders tend to turn to is a rubble trench foundation (possibly still with a concrete slab of some description). The key challenge can be making sure it’s sufficiently compacted enough and depending on the water table ensuring drainage is appropriate. (here’s a good link)

As with practically anything else, the local building inspector/planning department are going to have the final say and it may be due to the type and grade/slope of the site that they will only be happy with a specific type of foundation. We probably need an entire article on types of foundations really.

If anything, probably the best thing you could do is plan a modestly-sized, well-insulated and high ‘green’ specced house – this should more than offset your guilt from the concrete slab base – both while you’re alive to use it and hopefully for another few centuries beyond!

And finally some more interesting things that I couldn’t logically fit in the rest of the piece:

The as-near-as-damn-it-basically 2000 year old rotunda of the Pantheon in Rome is a testament to the strength and durability of the stuff and this is “only” lime-based, not modern cement.

Lafarge, now probably the worlds largest producer of cement (and other building materials) actually started off in 1833 mining lime and supplied materials to the Suez Canal. The cement industry is similar in terms of emissions to the Iron & Steel industry. (good summary here)

Phew. Bloody hell that was a long article. Subscribe for more!